The best filter ever?

In essence there are two independent 18 dB lowpass filters in parallel, only sharing the resonance knob and their outputs mixed in 'anti-phase', or in other words their output signals are subtracted from each other, instead of added. In practice this means that if both filters get the same input signal the LP band set to the lowest cutoff is subtracted from the LP band with the highest cutoff and this creates a bandpass response that only passes what is 'between the two cutoff frequency settings'. The filters can 'pass' each other, meaning it doesn't matter which filter is tuned higher or lower it is always the band between the two cutoff settings.
The trick in the Twinpeak is how the input to both filters is mixed before they go into the two parallel filters. So, not only the outputs are mixed but there is mixing on the inputs going on as well. The A and B input connectors both have their separate input mixers. Basically the subtraction is not done at the outputs, those mix positive, but the input to one of the filters is inverted in phase. This has exactly the same effect as subtracting the outputs. For input A its signal always goes into filter one and the curve A knob sets how much of the input signal goes into filter two. So, if the curve knob is closed the IN A signal only goes into filter one and in the final output you only hear the effect of filter one on the IN A input signal. And thus it has a lowpass response as filter two does not get the input signal. That means that there is also not the subtraction at work that create the bandpass, as filter two gives nothing to subtract. Then, by opening the IN A curve knob, the signal level of IN A into filter two is increased and now there is something coming out of filter two and the final output curve changes towards a bandpass curve. For IN B it works the same, but this input always goes into filter two and through the curve B knob to filter one.
Basically it means the following options:
1) When both curve knobs are at 'lowpass' IN A goes into filter one only and IN B goes into filter two only. Now the Twinpeak works as two independent lowpass filters with their outputs mixed into one output connector. Because they are mixed in anti-phase the IN B signal part will be in antiphase on the output, while the IN A signal part is still in phase. Modulate each filter independently by the PEAK 1 MOD and the PEAK 2 MOD knobs only, as the CUTOFF MOD knob will modulate both filters in a linked way.
2) When curve A is at lowpass and curve B is at bandpass you hear the lowpass part of IN A, set only by the cutoff peak 1 knob. And from the signal on IN B you will hear the band between the cutoff peak 1 and the cutoff peak 2 knobs .
3) When curve A is at bandpass and curve B is at lowpass you hear the lowpass part of IN B, set only by the cutoff peak 1 knob. And from the signal on IN A you will hear the band between the cutoff peak 1 and the cutoff peak 2 knobs .
4) When both curve knobs are at bandpass both IN A and IN B will be bandfiltered with the same band between the cutoff peak 1 and cutoff peak 2 knobs.
5) And there are many settings in between, also when there are two totally different signals on IN A and IN B. It is best to judge the effects by ear.
If one only want to use one input on an external signal one can either close the level knob on the oscillator or one can plug the signal into IN A and plug a matrix jackplug into IN B  to completely break the normalization with the oscillator outputs.
The 1V-OCT input will affect both paralllel filters equally, like the CUTOFF MOD knob does.
The filter has a very good 'ping' characteristic at its maximum resonance. It lets itself also be modulated very well by audio rate signals. E.g. feeding a slow B PULSE from the TriLFO into e.g. IN A on the Twinpeak and feeding the A SINE from the TriLFO into the CUTOFF MOD on the Twinpeak will create a wide range of 'metallic' percussive sounds when the LF-VCO A RATE is tuned to audio rates.
The PEAK 1 MOD and PEAK 2 MOD have there zero level at twelve o'clock and turning them to the left will 'reverse' the direction of e.g. an envelope sweep.
The VCA can be totally independent if VCA IN is used for the audio input and the VCA CV with any unipolar, positive control voltage.

Here is the flowchart of the TwinPeak filter: 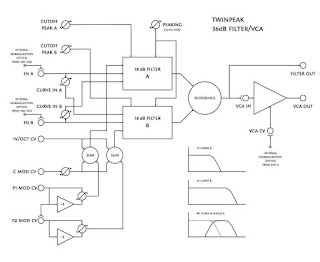 What if?... A TwinPeak filter bank (more than one module):

A single Twinpeak can be used to filter a single band of variable bandwidth and with 'corner-peaking'. The last means that the Twinpeak is not simply a bandpass filter with one resonance peak frequency in the middle of the band, like a 12dB state variable filter, but it means that the bandwidth can be set between two separately controllable cutoff frequencies and that when resonance is raised two resonant peaks appear, one at the low cutoff and one at the high cutoff of the band. And the cutoff slopes for both the low and the high cutoff slopes of the band are 18dB, which would only be 6dB on a state variable. So, in essence the Twinpeak is a 36dB bandpass filter.
A signal could first be panned in the DualFader module and then the AX/AL OUT and AR OUT pan outputs be fed to the Twinpeak A and B inputs and the CURVE IN A and B knobs set to lowpass response. This would allow the fader to fade from the A lowpass response, through a bandpass response, to the B lowpass response. Modulating the fader with a LFO or envelope can give quite lively filter results on otherwise static sequences and drones. Adding PEAK 1 MOD and PEAK 2 MOD and a little audio rate modulation on the CUTOFF MOD could be the icing on the cake.

If one would have two or more Twinpeaks it would be possible to make a high quality 'filterbank' with 18dB cutoff slopes with several Twinpeaks, using each Twinpeak for one band. They could all receive the same input signal and the outputs could be mixed on the matrix or with a DualFader module. Or, as in the previous example, a DualFader module can be used to feed the total of four pan outputs into the A and B inputs of two Twinpeaks.
One of the most interesting effects of the Twinpeak is when the two resonant peaks are swept independently, as this creates vowel-like effects. The most obvious use for two Twinpeaks would be to sweep four resonant peaks independently and thus get even more pronounced vowel-like effects. For this use a DualFader to pan one audio signal to the total of four pan outputs and patch those to the A and B filter inputs on the two Twinpeaks. Then mix the Twinpeak outputs in the matrix using the two bipolar VCAs on the NodeProcs to get a complex modulateable filter with many modulation points, as the Dualfader can be modulated, the Twinpeaks can be modulated in several ways and the bipolarVCAs can be modulated. Or, instead of using the matrix/bipolarVCAs, connect the Twinpeak outputs straight to two different channels on a mixingdesk and set stereo panning on the desk.
Quite some patching options here.

Thanks to Todd Barton for providing the picture of the module.
Publié par The Hordijk Modular Blog à 5:09 AM

Email ThisBlogThis!Share to TwitterShare to FacebookShare to Pinterest
Libellés : TwinPeak