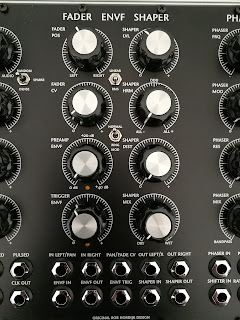 The Fader/EnvFollower/Shaper is special because it includes upgrades/redesigns of existing modules but also a new function. It comes in a panel with the Rungler, the Phaser and the FrqShifter. The Rungler may be switched to another module depending of one needs.

The DualFader now comes as a single Fader.
It has 2 knobs : Fade position and Fade modulation. It still has the same 5 connectors for different patching options. More on that later.
Please read the DualFader article to know more about it if you'd like.

It now has 2 switches.

The first switch gives the choice between RMS and linear curve behaviour.
The RMS curve will give an equal loudness contour no matter the fader position or modulation. It is better in use for audio purposes.
For processing CV signals (remember that all inputs and outputs are DC-coupled in Rob's modules) the linear curve might be a best use.
In the middle position of the Fader the linear curve gives -6dB of attenuation while the RMS mode gives -3dB.


The envelope follower is a feature that I was missing in Rob's modular and I am very glad it finally is here.

The EnvFollower has a high input impedance preamp that can boost the input between unity gain and a gain of about 40x. This is enough to e.g. connect a dynamic mic, an electric guitar, laptop signals, mpeg , etc...
The EnvFollower preamp output is internally normalized to the Shaper, the Phaser and the FrqShifter inputs. As the Shaper and Phaser inputs have a dry/wet knob one can use the dry preamp signal from either the Shaper or Phaser output.

The EnvFollower is quite fast on attacks and has an extra trigger output when it detects a change from a downslope to an upslope. Normally envelope followers are quite slow, as they need a smoothing filter at a very low frequency to filter the audio from the CV signal. This gives a sluggish behaviour. Rob designed a special smoothing filter that has a much higher cutoff when the slope goes up and a normal slow filtering when the slope goes down.
The EnvFollower is a chain of a preamp, a peakdetector with the specially adapted smoothing filter, plus an up/down slope detector to signal a transient signal in the incoming audio.
The result is that it follows percussive sounds much better and creates a trigger on the instant when a percussive sound is hit. So, if one would feed it a drum computer signal with kicks, snares, hi-hats, etc., it is able to instantly give a trigger on any hit.

The envelope CV output can modulate e.g. the Phaser or the FrqShifter and turn the panel into a ‘whammy’.
The trigger output can be used to clock the Rungler, DualEnv, sequencers, etc.


The Shaper is a different design. It uses four knobs, but only two connectors. So, the VCA/Ringmod will be dropped. As that VCA is exactly the same as the two bipolar VCAs on the NodeProcs its not really an issue.

The original one was a bit noisy due to some complex diode issue involving natural quantum noise in diodes. Rob redesigned the wavefolding part forcing all the diodes in a working mode where they do not produce that much quantum noise. In essence it does the same kind of wavefolding, but the symmetry knob from the original design has been replaced in favour of a symmetry knob like is on the old Blender module. It makes it sound cleaner, smoother. But the frequency doubling effect of the previous Shaper is gone.

The Depth knob sets the amount of wavefolds. The Symmetry knob will introduce even harmonics to the odd harmonic distortion produced when folding a symmetrical waveform like a sinewave.
The Overdrive knob will introduce a mild overdrive effect by 'tilting' the momentary angle of a folded waveform and theMix simply fades between the dry input signal and the wet folded signal.


Here is the flowchart if the Fader and EnvFollower : 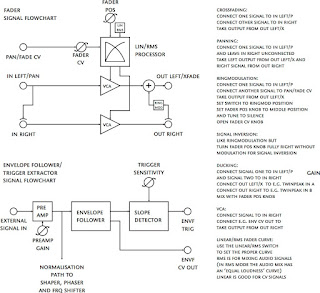 Here is the flowchart if the Shaper : 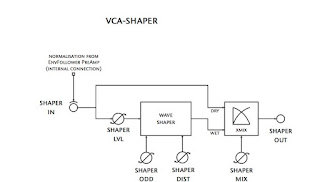 Check these videos for sounds and more explanations :

Publié par The Hordijk Modular Blog à 2:11 AM No comments: