A Swiss Army knife for modular.

The Dual Fader is a voltage controlled mixer module with several options useful for different applications for dynamic signal. It can be used in various ways and at different points in your patches. It contains two RMS 'equal loudness' voltage controlled faders with both two inputs and two outputs. Depending on how jacks are connected the basic functions are crossfader, panner or alternating VCA.

In a two inputs/one output configuration, the channels will act as individually voltage controlled crossfaders usingAX and/or BX outputs and the signal goes from one signal to another with the fade control. Fade parameter is voltage controlled.

In a one input/two outputs configuration, the channels will act as individually voltage controlled panners with "energy loss compensation" set at -3dB with the control centered (equal loudness curve).

It is good to note that when a signal is connected to only input A1 (or B1) and the output is taken only from AX/L out (or BX/L out) the input signal will go to both VCAs and the output will be taken from the mix of the VCAs.

Each channel has a 20dB boost available to, for example, adapt external line level signals to the signal levels inside the modular. This is also very useful to crack up the level of stompboxes to synth signal level. This way it is easy to use a fader to e.g. crossfade between the input and output of an external guitar stompbox effect or line level effects processor. With some clever routing using the matrix it is also possible to create external feedback paths for external effects and have the feedback under voltage control. You can watch examples in the videos at the bottom of the page. This 20dB boost is applied to the A2 & B2 inputs. A1 & B1 inputs are normalized to the A2 & B2 inputs respectively, so that when no jack is inserted in the inputs A2 & B2, the signals present at A1 & B1 are duplicated and can benefit of the 20dB boost. It now has an interesting feature, as when it is opened it will start to clip the input signal when a high level signals like from an Osc or the output of a filter is used. Now you can use the module as a distortion by letting the signal clip and basically set a mix between the clipped and the unclipped signal by the fader knob.

One application for this boost would be to feed a signal into e.g the A1 input and the input of a stompbox effect. Then route the output of the stompbox into the A2 input and crank up the gain from the stompbox output (that is often at line level) until it matches the A1 input level and now crossfade between the dry sound and the wet stompbox effect, e.g controlled by an envelope or a sequencer. Alternatively it is also possible to use a fader to set e.g. echo time on a stompbox, in this case one sends the output of a fader to the input of an echo-box, and reconnect the output of the echo-box to the A2 input, with the audio signal to be processed on the A1 input, while listening to the fader output. When the fader is turned left the dry input signal will be present on the output. By turning the fader to the right the output signal that is also routed into the echo-box will now route back a delayed signal into input A2 and the delayed signal will also be rerouted into the echo-box and thus start to create echo repeats. When turned more and more to the right (and the gain level set correctly) this patch will eventually create an infinite repeat. And this is now under full voltage control.

The AX TO B LEVEL knob receives a signal that is the crossfade mix of input A1 and A2. This signal is generated internally and is fed through the knob to the second fader and internally added to the B1 and B2 inputs.

The switch is in the line to the B2 input and it has three possible functions:

The signal from fader A is passed through the AX LEVEL knob in an equal amount to both B inputs. In this mode you can for instance make a mix of two signals with fader A and then pan this mix to outputs BX/L and BR. So, you would e.g. connect two oscs to inputs A1 and A2, not use any of the A outputs, open the AX LEVEL knob and connect the BX/L and BR outputs to the left and right channels of a mixing desk or to two different audio processors. The FADE A knob sets the amount of mix of the two inputs and the FADE B knob pans the stereo position of the mix from left to right. The AX TO B LEVEL knob can be used as an overall volumeknob. Modulating the FADE B MOD at low rates yields tremolo / leslie effect-like results.

In this mode the internal mix signal from the A1 and A2 inputs is fed only to the B1 input. In this mode you can e.g. mix three signals to the BX/L output. Connect two signals to the A1 and A2 inputs and a third signal to the B2 input. The FADE A knob sets the mix between the A1 and A2 signals andthe FADE B knob sets the mix between the A1/A2 mix and the signal on the B2 input. This way you can mix three signals in any ratio with only two knobs and always have an output signal, as long as the AX TO B LEVEL knob is opened. You can even add a fourth signal by plugging it into the B1 input and set its input level with the B1 IN LEVEL knob.

To do this just connect an osc to the A1 input (your carrier signal can also be a composite signal of A1 and A2), set the FADE A knob to its middle position, set the switch to RM mode, open the AX TO B LEVEL knob, plug a second oscillator into the MOD B IN connector, listen to the BX/L output, close the FADE B MOD knob and adjust the FADE B knob to the middle until you hear silence. Now slowly open the FADE B MOD knob and you will hear a ringmodulator effect. Tune the oscs so that they produce a nice sound and play both oscs with the same 1V/Oct signal from e.g. a keyboard. Changing the tuning ratio between the two oscs, setting their basic timbre with the ODD and EVEN HRM knobs and playing with the FADE B and FADE B MOD knobs will take you through a whole range of ringmodulator timbres. Due to the nonlinear crossfade curve there will be some distortion in the ringmodulation, and the modulation depth will define the amount of distortion. But as the curve now has sort of a compressing effect on the modulation waveform a triangle wave will be sort of compressed to a sinewave at a certain modulation depth and fine tonal control can be achieved by setting the modulation depth at certain levels for certain modulating waveforms. E.g. you can create the typical vintage 'diode-transformer' ring modulator sound from the fifties and sixties as used by e.g. Karl-Heinz Stockhausen or those SF-timbres from many sixties and seventies SF movies. The A2 IN GAIN control may be used to slightly overdrive carrier input into the modulator, for example leading to more 'vintage' sounding results.

The 'ducking' mode happens when two different signals are connected to e.g. the A1 and A2 inputs and the AX/L and AR outputs are both connected to two inputs of a mixing desk. In this mode the A1 signal goes straight to the AX/L output and the A2 signal to the AR output. When playing the FADE A knob one signal will increase while the other automatically decreases in volume. If the FADE A MOD input would now receive e.g. a side chain CV signal from a compressor that signal would automatically drop the volume on the A1 > AX/L line and open the A2 > AR line. This is often used when a narrative is added to a music track for a film or documentary, so that when the speech comes the music is automatically lowered in volume. It would however need an extra compressor with a side chain CV output or an envelope follower module. Of course you could also modulate this 'ducking' effect with an LFO or an envelope signal.

Here is the flowchart of the DualFader : 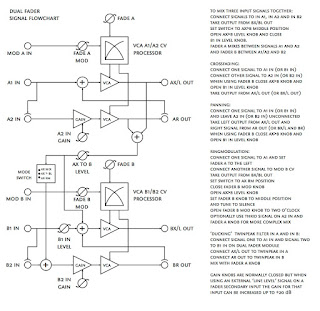 Check out these videos, you will find tons of good examples of patching this great module.

Thanks to Todd Barton for providing the picture of the module.

Email ThisBlogThis!Share to TwitterShare to FacebookShare to Pinterest
Libellés : DualFader