This module has three independent low frequency voltage controlled oscillators or LF-VCO's that can also be synced and cross-modulate. Three LEDs give visual feedback of the activity of the three LFOs. The modulation inputs of all VC-LFO's are normalized at the input connectors in such a way that everything can crossmodulate and sync.

LF-VCO A provides a Sine wave wich has no corners, giving very smooth modulation. It has a wide frequency range going from quite slow to well into the audio range, so it can be used as a sound source as well as a modulator. This LFO is tied internally to LF-VCO C. The latter will modulate the former in FM and in combined FM-AM called "fluctuation". This "fluctuation" modulation soft-syncs to the harmonics of the modulating signal. Therefore the modulation depth 'feels' more natural even when the frequency of the modulated waveform is increased. This results in an extremely natural sounding vibrato, much gentler than through a normal LFO. Pitch is controlled manually. By mixing LF-VCO A & LF-VCO A Fluct, at a certain point, one can only hear the amplitude modulation which is interesting when modulating the pitch of an oscillator.

The frequency of LF-VCO B can be modulated internally by LF-VCO C or by an external signal.

LF-VCO C has a triangle and an pulse output. Rate goes from several minutes to around 100Hz. The LF-VCO C Mod slows down the rate of the downgoing slope of the triangle. The rate of the upgoing slope remains the same. So, when e.g. speeding up the LFO and opening the C MOD knob the waveform will take on the form of a fast attack and slow decay envelope like a sawtooth wave. The pulse output is high when the slope is going up and low when it is going down, so the pulse length will remain the same but the time between the pulses will
increase.

Regrettably this selfmod feature is obsolete as Rob developed a S&H instead.
Here is Rob's description about it :

The modulation input of LFO C has a S&H right after the input connector, but just before the input level knob. LFO C triggers the S&H circuit.
On every positive peak and on every negative peak of the triangle waveform the S&H samples the LFO C modulation input signal and holds the sampled value during the slope that follows. This means that the S&H causes every upslope and every downslope of the triangle to have a different duration, defined by the momentary value the S&H happened to sample. However, the slopes will remain perfectly linear, only their steepness is affected. The effect is that there is a more or less random spread in time. On the pulse output this causes pulses of different duration, an effect also named clustering in time.

When no signal is inserted in the LFO C modulation input it is normalized to the output of LFO A. This means that when no jacks are applied to the LFO A and LFO C inputs, but their input level knobs and the LFO A fluctuation knob are opened, the result is constantly varying pitches and rates on both LFO A and LFO C, caused by the crossmodulation between LFO C and LFO A. On LFO A it will always sound like a stepped pattern unless you also open the fluctuation knob, as that will modulate the pitch slightly with the slopes of LFO C or with an external signal when the fluctuation input has a jack with a signal plugged in.

Note that for pitch or frequency modulation there is a behaviour that a fast pitch can easily be deeply modulated by a slow pitch or rate, but a slow pitch or rate is much harder to modulate deeply with a much faster pitch. A S&H changes this FM equation into a pure statistic function that becomes pitch independent, resulting in slow rates reacting much deeper to faster rate modulation signals as without the S&H. E.g. when a 1Hz LFO is modulated straightforward with a 1kHz audio signal there may only be a tiny bit of 1kHz zippery noise on the LFO signal, but the 1Hz will not seem to change much. But through the S&H the LFO will instead go all over the place, defined only by the average amplitude of the 1kHz signal.

There are maximum possible pitches for the three available LFO’s, they basically can not go faster as the maximum setting on their rate knobs. To use the S&H modulation on LFO C it is often a good idea to not set the LFO C rate knob to its maximum. There is not such a limit for the minimum rate times, though a very large negative modulation signal can cause a LFO to actually stop oscillating. If this happens when the LFO C rate knob is at its minumum, the modulation level knob is fully open, and a sampled negative signal is stopping the LFO, and thus also not sampling a new value that can start it again. In this case LFO C may appear to be frozen. In that case you can just open the rate knob a bit until it starts oscillating again. Or wait for a very long time for the S&H capacitor to eventually loose its charge.

A tip is to e.g. apply the LFO C Pulse output to the S&H input of one of the EnvGens while clocking that EnvGen with a stable clock. Then feed the output of that S&H to the Gate input of the second EnvGen. While the first EnvGen is triggered at a stable rate the second will trigger only now and then in an irregular rate but synced to the clock of the first EnvGen. If LFO C is deeply modulated the second EnvGen gates seem to appear in clusters in time.

And there are many other uses if you want to introduce a smaller or larger amount of variation in dynamics to an otherwise static pattern, or to spread events unevenly in time.

A video of the new feature is at the end of the page.

Here is the flowchart of the Triple LFO with LFO C selfmod. 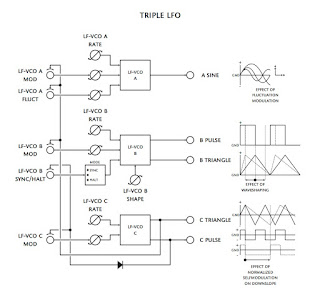 Here is the flowchart of the newer Triple LFO with S&H. 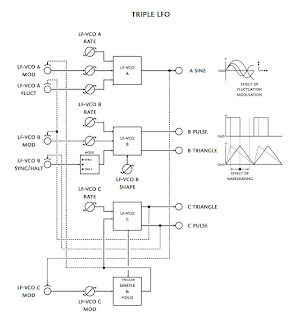 Here is a video of the Triple LF-VCO. As I couldn't upload the one at Novars please follow this link : https://vimeo.com/239786705


Here is the explanation of the new S&H feature.


Thanks to Todd Barton for providing the picture of the module.