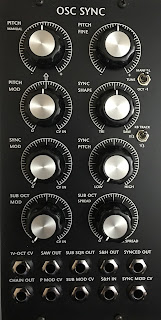 The OscSync has at its core a sawtooth oscillator with a downgoing slope. On the flank of the sawtooth it syncs a second built in osc that has a waveform that can be morphed between a triangle and a sawtooth.
A hardsync sound basically has two sonic components, one is a formant effect that when swept gives a flanger-like sound, the other is a pulse that is produced by the transient flank introduced on the syncing moment. This transient has a level that depends on the frequency of the synced osc and when swept it goes up and down in level in basically an unwanted way. As this new transient has a lot of sonic energy in the high end of the spectrum it doesn’t sound good on e.g. sine and triangle waves that by nature do not have one or more transient flanks in their waveform. And so it is of interest to suppress only this sync transient effect. For this a sync transient suppressor is built into the osc and this makes the sync sweep sound as smooth as silk, no matter the type of waveform.
Both the original sawtooth and the ‘transient suppressed’ synced waveform are brought out on separate output connectors.

There is a subsquare divider built in that goes into a built in VCA. This signal can be used to modulate the sync sweep. The effect is that on every alternate wavecycle the formant structure caused by the sync is alternated by two settings that depend on the level of modulation. This gives a ‘talkative’ effect on the sound. This subsquare is also brought out on a connector to modulate e.g. a filter that has the basic sawtooth wave as its input.
The sub out can also be used in a mix with either the sawtooth or the synced sound to add a suboctave bottom to the sound.

There also is a built in S&H that triggers on the flank of the main sawtooth osc. It has its own input and output, but by default the input is normalized to the internal transient suppressor and samples the level of the sync transient. The output is normalized to the modulation inputs of the main pitch, the subsquare modulation level and the sync sweep CV inputs. The sync transient depends on the pitch of the synced oscillator in an ‘irregular way’ it can be fed back to the sync sweep input to cause a ‘chaotic’ modulation on the sync sweep. This effect is not unlike the effect of a rungler circuit. When also fed back to the main pitch modulation input it will change the length of the wave cycle with an amount that will be different for each cycle. As the oscillator can go into the LFO range this can also create quite nice effects.
The normalizations can of course be overridden by plugging in a cable at the CV input connectors or close the modulation level knobs.

The S&H can also be used with an external audio signal to ‘bit crunch’ that signal.

The sync transient suppression is what makes this osc unique. The S&H and subsquare make it great for a vast range of different sonic effects.

As this oscillator can do a range from quite traditional synth and sync sounds, but with a very smooth sound, up to rungler-like chaotic sounds the Twinpeak is the prime suspect to do filtering on the several output signals from the osc. The two Twinpeak ‘peaks’ can e.g. be modulated separately by the subsquare output, the S&H output or an audio range signal from e.g. the OscHRM or an LFO and/or envelope.

Here is the flowchart of the OscSync : 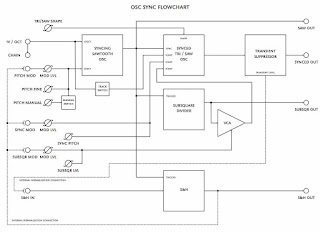 Chris David aka Osc1899 filmed these videos of Rob explaining the module :

Also this video of the Novars workshop is quite nice :

And there are also more videos and audio available. Check Todd Barton's channels and be amazed ;-)

Thanks again to Todd for providing the picture of the module.

Email ThisBlogThis!Share to TwitterShare to FacebookShare to Pinterest
Libellés : OscSync